The archives and libraries were closed today, so I took myself down to the riverfront to look around some of the National Museums Liverpool, specifically the Museum of Liverpool, the Merseyside Maritime Museum and the International Slavery Museum. The latter is currently located on the 3rd floor of the Maritime Museum, although it will someday have its own building.

They are very nice museums. The Museum of Liverpool only recently opened, and the outside is still being completed. The Maritime Museum opened in the 1980s. Both focus primarily on the history of Liverpool since about 1850, emphasizing urban development, Cunard and the Titanic, World War II, and Merseybeat. The International Slavery Museum, which grew out of an exhibit on the Atlantic Slave trade, is by nature of its subject centered on the 18th century, although it emphasizes that slavery is not merely a historical institution.

I enjoyed nosing about the museums in a general sort of way, but I confess I was disappointed in the lack of information on Georgian Liverpool. There is a timeline exhibit in the Museum of Liverpool, but the 18th century is in the same case as the 16th, with very little space given to it. Liverpool does not seem reluctant to talk about the fact that slavery played a large role in its development into a major commercial center, but the town during that era is largely left out of most narratives. With one notable and very enjoyable exception.

When I entered the Merseyside Maritime Museum, I noticed a banner with an 18th century looking map promoting a tour of the Old Dock. Curious, I wandered over to the desk and discovered a brochure, which confirmed that the Old Dock Tour related to an 18th century dock – as I was to learn, the first commercial wet dock in the western world. The tour required a booking but no fee, so I put down my name. I expected some sort of walk around the commercial area now laying over the old dock site, with some “this was here” comments. Instead, the tour goes to one corner of the Old Dock, all of which was preserved when the dock was closed in the 1820s. It is now the site of an archaeological excavation and was apparently featured on Time Team (a British TV show).*

I had fun. The two guides were informative, friendly, and well-versed in the topic. There were only two other people, local gentlemen, on the tour. After being conducted into the dig site (through a car park, under the square outside John Lewis in Liverpool One), we were given a brief lecture and then allowed to read the interpretive panels and ask questions. This was more than the glimpses of Georgian Liverpool I’d gotten in the museum buildings, this was a visit to a remnant of it. What’s more, I know that James Maury’s consulate office was about a block from the Old Dock, so I felt like I knew a little more about the Liverpool which he experienced (by the 1810s, the Dock was full of sewage, so I imagine he was well aware of its proximity). 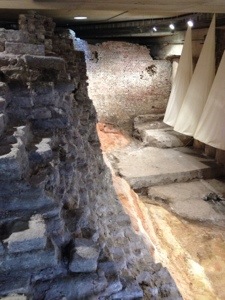 *I feel compelled to point out that the dock was closed because it was full of sewage, when it was re-opened as an archaeological dig there was still organic matter remaining, but the tv people didn’t show up until the professionals had dug through layers of Georgian excrement.