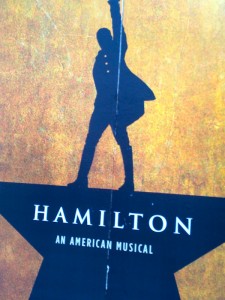 The popularity of Lin-Manuel Miranda’s Hamilton: An American Musical is undeniable. It won a Grammy (Best Musical Theatre Album), will likely be nominated for (and win) multiple Tony Awards, and has been discussed by scholars and the popular press. It has been lauded and critiqued by scholars of history, theatre, and literature. But the popularity of Hamilton also raises a challenge for historians of Early America, especially those who do public or digital history:

To borrow from Miranda’s King George III: “what comes next?”

How do we engage the people who are coming to this history through Hamilton? Having considered the gaps in the stories told by the show, how do we bring that history to people who are, in my anecdotal experience, eager to learn more? While offering further reading on the period or pointing people to existing programs are good places to start, I think we can do more.

To truly connect with the populations who are flocking to Hamilton: An American Musical, we need to look beyond the historical period and consider what makes the show popular. The music is strongly rooted in hip-hop, rap, and r&b, but there are also nods to classic broadway, even Gilbert and Sullivan; Miranda is speaking in a voice that is familiar and accessible to a wide range of people.

Moreover, audiences who have never set foot in the theatre (either the Public or the Richard Rogers) have been welcomed by Miranda and the show’s cast in various forms of online engagements. Miranda, who like his title character seems to work non-stop, frequently converses with fans on twitter and has joined tumblr where he reblogs and likes fans’ posts. When someone added the lyrics of the show to Rap Genius and the community started annotating, he expressed delight and even noted (again on twitter) when people guessed correctly about a riff or other fact. Members of the cast and crew have live-streamed events on SnapChat and Facebook.

Interactions between the cast and crew of Hamilton and its audience – its fandom – are conversational and egalitarian to a large extent. When the audience creates annotations, transformative works, YouTube videos, the official Hamilton community generally responds with praise or gratitude. The creators of Hamilton have embraced their fan community and recognized its voice as a valid participant in the expression of the show an experience, as a cultural moment.

The challenge as I see it for public/digital/early american historians who want to catch the wave of Hamilton’s popularity to expand the understanding of the show’s fans is to find ways to communicate which echo the accessible tone of the show and which convey a sense of shared experience where the non-expert is welcomed and celebrated. We should try to share our enthusiasm for the past with them, and welcome their enthusiasm or concerns in return, instead of imparting knowledge. Conversation, shared authority, a willingness to allow emotion to be part of the experience of history, are all useful tools as we try to convey the rich history of late eighteenth- and early nineteenth-century America.

A note: I started drafting this post last week, before attending the 2016 Annual Meeting of the National Council on Public History, whose theme was “Challenging the Exclusive Past.” Every day of the conference brought me new possibilities for creating a more inclusive interpretation of the past, as well as the challenges which exist. It reiterated what I had been thinking about when I began writing this post: that we need to create an inclusive (public) history of the Revolutionary/Early National era, telling the stories of the wise range of peoples of many races, ethnicities, gender identities, and classes who lived through this period and including our publics as participants, not an audience, when we do so.

One tweet from the conference which I feel captures some of what I’ve been trying to say came from Lara Kelland, quoting Denise D. Meringolo “I wanted to let people tell their stories, but I didn’t want us to tell them what their lives mean.”

The dead may have no control who lives, who dies, who tells their story, but the living should have a say.

On my way back from Poughkeepsie, I stopped in New Paltz to visit Historic Huguenot Street, which popped up on my twitter feed on Sunday evening. Once I arrived, I realized I’d been there once during my college career, but only to wander around outside, never in the buildings, and moreover they’re in the process or renewing their interpretation.

One interpretive choice they’ve made is to pair two 18th century houses. One is unfurnished, so you can see the architectural features and the way the construction progressed over time. The other house is fully furnished with pieces that are (mostly) appropriate to the period interpreted. Our guide was explicit about the comparison, particularly when we were in the basement kitchens of the two houses. In the unfurnished house, the kitchen felt smaller, there was less natural light and little artificial light, and the overall feeling was depressing. The kitchen in the furnished house had more light, natural and artificial, and seemed almost cheerful in comparison. However, our guide reminded us that the space would have been smoky and smelly, and that in the 18th century the people working in the kitchen would have been enslaved African Americans.

I appreciated the contrast as part of an overall effort by the site to make the act of interpretation transparent. Both guides I had explicitly stated “we have decided to interpret” and we were even asked if we thought the comparison of furnished and unfurnished was helpful. When I was working in a historic house in Virginia, we often talked about whether to interpret areas for which we had little or no documentation, in particular the upstairs bedchambers. Do you fully furnish a house, even without evidence? Or leave rooms empty, knowing that visitors often expect to see “what it was like”? And if you are guessing, what do the guides/docents tell the visitors? Historic Huguenot Street has the advantage of having multiple houses, but they could have chosen to interpret them all one way or the other. I think the decision to show the two paths interpretation can take, and in sequence, not only helps visitors think about the past but also how the past is presented to them at historic sites.

I look forward to returning for a more leisurely visit the next time I’m in the area. I’m curious to interact with the first person interpreters, and see where else the education and interpretation goes. My experience was a little off the usual, because I had a guide for all of the houses, when some of them usually have first person interpretation (they started the tour a little early for me since I had to drive back to Virginia).

Last weekend I attended my 10th college reunion. In addition to seeing people I haven’t seen since our 5 year, enjoying the annual alumnae parade (headed by a woman from the class of 1934!), and generally indulging in nostalgia, I had a chance to reconnect with two aspects of my undergraduate experience which helped shape my scholarly life: the History Department and the Vassar College Costume Collection (VCCC). END_OF_DOCUMENT_TOKEN_TO_BE_REPLACED

On Tuesday, I attended the Department of Interior’s inaugural panel discussion for the new theme study on Lesbian, Gay Bisexual, and Transgender (LGBT) history in the National Park Service (NPS). The study is part of a larger effort within NPS to ensure that the histories of minority Americans are included and communicated in their sites. 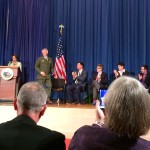 The panel opened with remarks by the National Park Service Director Jonathan Jarvis, followed by Secretary of Interior Sally Jewel and John Berry, who is Ambassador to Australia and one of the first openly gay ambassadors in the United States. In her remarks, Secretary Jewel stated that “place matters” but LGBT communities have not had places to mark their significance to the larger American story. She talked about the need for young people who are struggling with their identities to hear their story told in a way that helps them realize that they are not alone.

END_OF_DOCUMENT_TOKEN_TO_BE_REPLACED

Every year in the spring, my friends who are historical reenactors go to two events: Military Through the Ages, at Jamestown (MTA), and Marching Through Time, at MariettaHouse Museum in Maryland (MTT). Although the two events are quite different in scale and outward tone, the basic concept is the same. Groups that interpret military companies or troops from various periods come and are arranged in chronological order, and visitors can walk in whatever sequence they want, asking questions and seeing the progress (or regress, depending on your path) of military technology and tactics.

Shortly after Military Through the Ages took place, I received the latest issue of The Public Historian, one of my favorite regular publications. The issue has a wonderful interview with Ivor Noel Hume, and the following quote stuck with me:

And I have found that, with the seventeenth century, groups like the Sealed Knott Society in England, the reenactment group, they do some very good work. Someone takes an interest in shoemaking or building construction and they write little papers about what they have learned. They are just not about shooting but are deeply interested in the history and make contributions.[1]

At this point, I think I should clarify something about my reenactor friends. One or two go to events like Military Through the Ages with 20th c. groups. A few are part of a Jacobite regiment, from the 1745 Stewart uprising. But most of the people I know are part of two groups: La Belle Compagnie, which interprets the 1380s, and Lord Grey’s Retinue, which focuses on the 1470s.

For the first time, after reading the article and my friends’ posts about their weekend of interpretation, I was struck by what a unique opportunity they offer in the US.  When I was in Scotland, you could go to any number of castles or other historic sites and find people, professionals or amateurs or both, interpreting everything from the Roman era to post-World War II rationing. The picture at left is from a tournament weekend at Linlithgow Palace, a huge draw for people of all backgrounds; throughout the day this man demonstrated the process of putting on armor at the time of the Battle of Flodden (1513), and pointed out the differences between his armor, as a noble, and that of his vassal.

In the United States, I am not aware of places that offer regular access to pre-1600 interpretation for any culture (Asian, African, or European, although I sincerely hope there are some Native American/First Nations). Looking back to when I was a kid, I know that as much as I loved reading, seeing people demonstrate martial and material culture would have had a much greater impact. In fact, I know it did, because I vividly remember what living history interpretation I did see.

What it means to me is that my friends, who are by day programmers and military personnel, stay-at-home parents and bankers, are also some person’s first experience of tangible wonderful history. It might be the man demonstrating cooking, or the woman with the spindle, or just seeing the parent and children running around playing with toys appropriate to the period of interpretation. They are bringing to life a period and area of history which does not, in this country, have a physical presence, and in a way which is purposefully accessible to the public. I think that’s wonderful.