I am in Iceland for roughly 26 hours (of which at least 5 are taken up with the airport and getting to/from it). Luckily, the friend-of-a-friend who is letting me stay the night lives within walking distance of the National Museum of Iceland.

My path through the museum was somewhat random, as I was doding a school group which entered about the same time I did, but the overall layout of the two gallery floors was more or less chronological as well as thematic. Themes overlapped, but everything pre-1700 was on the second floor, and everything post was on the third (the ground being for the museum shop and cafe).

I was frustrated by some things, for example the fact that it was unclear whether labels were indiciating where an item was found or where it was made. On the other hand, I thought the museum found clever ways to deal with lighting and sound issues in an open floor plan gallery. In at least two instances – medieval textiles and 18th century drawings – items were kept in plexiglass topped drawers which the visitor could pull out, but which were weighted to slide back when let go. 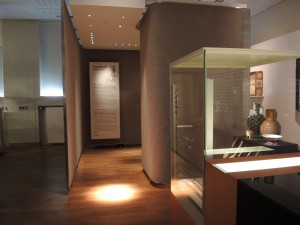 In addition, particularly on the second floor, the museum used partitions and coloured plexiglass to create small rooms or spaces with motion-sensor lighting. One of these housed medieval embroideries, and another included not only ecclesiastical art but a soundtrack of latin chant music, which was contained by the walls of the ´room.´Along with vertical display panels and cases, these room-like spaces created discrete areas in the museum for each theme or era.

It´s a very nice museum, with a lovely cafe on the ground floor (with free wifi!). If you have a chance to visit, I recommend it.

I have never studied this formally, either from the perspective of a sociologist or historian, but I often find myself thinking about how quickly we (generic Americans and Europeans) have come to believe that our concept of “personal space” and housing are absolute, when in fact the way we live has changed in the past, say, 100 years.

I first really started to think about this in the context of historical reenacment, specifically creating historic costuming. It is very easy to say that all working women must have worn front-lacing dresses (16th c.) because it’s hard to lace yourself into something that’s on your back! Besides the fact that spiral lacing makes this much easier, the simple fact is that (most) working women would not have been getting dressed alone. They would have lived all their lives with other people around them – parents, siblings, spouses, children. There would have been someone to help them with the fiddly bits of getting in and out of clothing which laces and pins together.  Realizing that was an Aha! moment for me, but as I continue to research and build historical clothing (when you get it right, it’s clothes, not costumes), I see that a lot of people do not realize how very different the day-to-day life was in the period they are recreating.

The lack of private residence in history was also prominent in my mind this time last year, when I had just started my job and was looking for housing. I have never in my life lived all on my own. I lived with my parents, my sister, with people in a dorm, or with housemates; last year I thought that this was somehow a failing on my part. Moving out on your own is a sort of rite of passage for middle-class American kids, proof that we have achieved some form of adulthood. And yet, I realized, that’s a fairly new concept. Not moving out of your parent’s house, but the idea that it has to be somewhere that you are the only person eating, sleeping, and paying rent.

These thoughts are still bulding in my mind. I still make front-lacing dresses (there are some pictoral examples), and I think it might be nice to have a place which is just mine (but in a rowhouse or apartment building). Somehow, however, in this world where people increasingly text faraway friends instead of talking to the friends nearby, where people seem to be getting more connected and more isolated, I think it is helpful to remind them (us) that we used to live a lot closer together. If nothing else, it might explain why we sometimes get lonely in our shiny one-person apartments.